Star Trek Beyond has officially wrapped principal photography in Dubai, according to writer and star Simon Pegg.  That means that all that’s left to do are pick up shots, most likely some second unit footage, the majority of special effects work, editing, scoring and possible re-shoots and looping if things don’t look or sound quite as good as they should when everyone is in the editing booth putting the movie together. 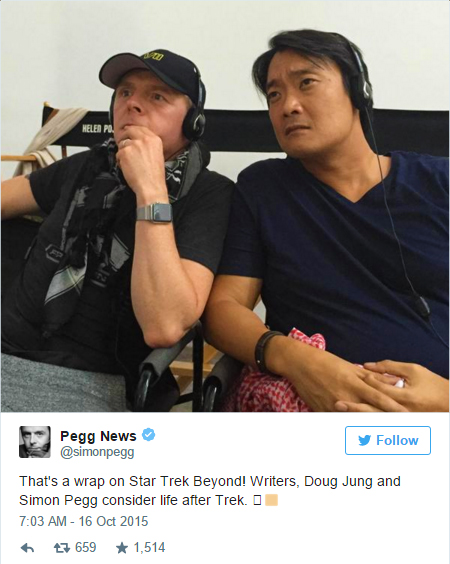 Also posting on social media about the end of principal photography, was Zachary Quinto.  Zach posted a short clip of him saying goodbye on the set and, as seems to be Zach’s thing, the words accompanying the short clip were enigmatic.  Zach wrote: “This.  Maybe for the last time.  Maybe not.”

A few Trek sites are talking about the end of filming, and feature more social media posts from some of the stars.  If you’d like to check them out, the links are below:

Also, Michael Giacchino is getting ready to score the film – but there will need to be a rough cut of the movie completed first which means we probably have a couple of months to wait until we hear any news about that.

For a film that was in a very uncertain place late last year after Roberto Orci’s exit, things have come along nicely.  The break neck pace that was set for the cast and crew seems to have been handled with grace and professionalism by new Trek director Justin Lin.

I’m so excited to see what the team have put together for us!