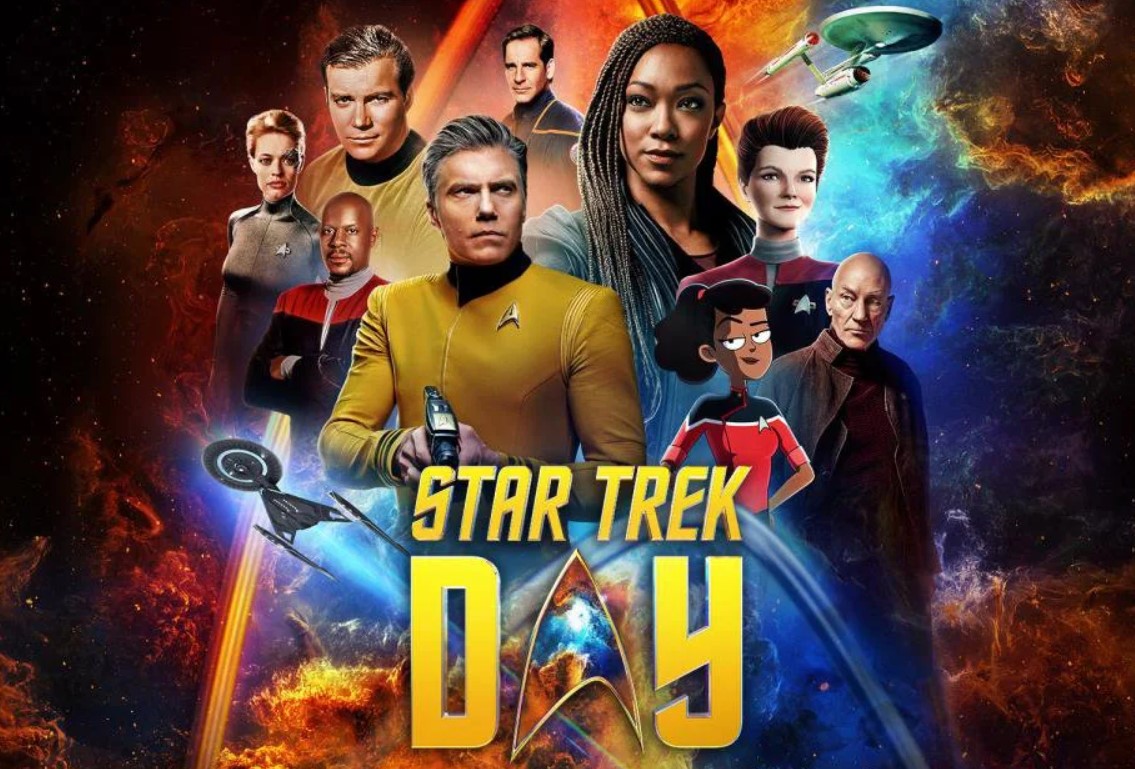 Today, in the US (8th of September, 2021 – it’s the 9th in Australia), is the 55th anniversary of the juggernaut that is Star Trek in all of it’s wonderful iterations.

55 years ago the show aired on US TV, giving birth to an idea that helped reshape our world for the better. One human being’s belief in the tenacity and resilience of humanity resonated with audiences of the time, and continues to today. Gene Roddenberry’s brave and compelling creation has become a legacy that has persevered through generations.

Our coverage of the event will be via live updates to this post. It’s not going to be 100% comprehensive, thanks to international time differences and the fact it’s the first third of the work day here in Australia, but we’ll do our best.

So far, in the stream, we’ve seen some beautifully edited sequences, heard about an auction whose proceeds will go to COPD research (the disease Leonard Nimoy suffered in the latter years of his remarkable life), watched the Star Trek: Prodigy preview, and we’ve heard from Malcolm Reed actor Dominic Keating about his fond memories of filming Star Trek: Enterprise. We’ve also seen a lot of Star Trek: Lower Decks clips.

Who doesn’t love Star Trek: Lower Decks? It’s like a slice of happy in our currently troubled world.

It’s going to be exciting to see what else StarTrek.com has in store for us.

Let’s see what’s out there!

I don’t know if this is an international viewing thing or not, but we’re getting a lot of adds – presumably because we’re waiting for the next panel or special feature?

Hot tip for our friends at StarTrek.com and Paramount/CBS, it’s a bit repetitive. Maybe some beautiful rolling visuals with some iconic Jerry Goldsmith music in between panels and features next time?

Well, I’m not sure what’s going on with the Star Trek Day event, but it’s still an endless cycle of repeating segments. Chances are, I messed up times thanks to our friend the International Dateline!

Nevertheless, we will soldier on. We’ve learned that Nana Visitor (Kira from Star Trek: Deep Space Nine) is writing a book, and we’ve seen the same clips from Lower Decks enough times for me to be able to recite the lines back to the screen.

Nana’s book will be out some time in 2022, and it’s focused on women in Star Trek – in particular, the influence women have had on Trek, and how the shows themselves have influenced women across the decades. She’s interviewed scientists, actors from the series, astronauts, stunt people and more, and it should be a really interesting read.

So far, my favourite parts of the celebration have been the “in his own words” quotes from Gene Roddenberry that are peppered here and there over visuals from the various shows and movies.

Gene Roddenberry has, at times, been a controversial figure – especially toward the end of his life where, allegedly, he became a bit irascible. Despite what may or may not have happened with Gene during the early Next Gen years, you can’t deny the fact that he was a visionary who saw a better world during a time where it was heard to see anything beyond the pervasive darkness and eroding faith in humanity of the times.

We’ll keep watching the celebration with one eye, and will provide updates as they come.

I do wonder if our friends in the US are getting a better show?!

Season 4 looks pretty epic. I’m not sure about the new uniforms yet… but I am glad they’ve changed them from the grey version we saw at the end of season 3. That design looked a little clinical – like something from a dystopian future where everyone walks around looking the same. This new version of that same design is not exactly flattering, and the colour palate doesn’t exactly work against the background of the Discovery bridge, but it’s a step up!

I’m not one of the fans who disliked the unusual original Disco uniforms… but I was glad to see them go because they were a bit of a leap when compared to previous Treks. Now, I kinda miss them looking at this version. They ‘fitted’ the colour aesthetic of the ship a lot better – but I’m hoping my opinion changes once I see them in action.

In other Star Trek Day news, there is a new trailer out for season 2 of Star Trek: Picard, which will premiere in February 2022 on Paramount+ and Amazon Prime. The series has been renewed for a third season, which has/is being filmed back to back with the recently completed season 2 shoot.

In season 2, our old friend Q changes history, turning the Federation into a dystopian totalitarian regime. Picard and his team have to travel back to 21st Century Earth to undo the damage, and somehow the Borg Queen is a part of the equation. It also looks like Q keeps a careful but interfering eye on everything Picard et al get up to.

It looks good! And drastically different to the first season.

Perhaps the biggest news, for me at least, was the ‘casting announcement’ for the new series, Star Trek: Strange New Worlds.

Here’s what we learned:

There are a couple of other new characters, too: an Andorian officer called Hemmer (fantastic makeup, I’ve gotta say), and Lieutenant Erica Ortegas.

EVERYTHING is the video introducing the crew of Pike’s Enterprise makes the show look like it will be incredibly special. It all looks great – the sets, the costumes, all of it.

You can watch the video at StarTrek.com. Just hit the link.

We’re going to have to wrap our coverage up with this most welcome of announcements, because I’ve really got to get some work done.

For now, here are some shots of the characters in costume and on set. Thanks for checking our brief coverage out.

Let the speculation begin! We’ll certainly be doing some in the next day or two!

To wrap up, I just want to say that everyone in the cast looks super-excited to be a part of the show, and they just look good. It’s a beautifully diverse cast, it contains some surprises – and ones that delve deeply into the history of the Star Trek universe, and some of the new cast seem very relieved to have finally been able to peel back the veil of secrecy around who else makes up the main characters on the show.

I highly recommend you go check out the video.

That’s it from us, it looks like we missed the bulk of what was on the live stream, but the main events are available to watch on the official site.

As always, Live Long, and Prosper.