On the 23rd of July last year, CBS released a teaser trailer for Star Trek: Discovery.  It was unfinished, and the ship design that appeared in the trailer was not finalised – but it gave those of us hungry for news on the new Star Trek series something concrete to get excited about.

Now, a little over six months later, CBS have released (?) a second teaser trailer which actually gives us tiny glimpses of what is to come.

The trailer appeared online early yesterday morning Australian Eastern Daylight Savings Time which was probably some time in the evening in the United States… and then disappeared.  It wasn’t available anymore.

Thankfully, it can still be tracked down.  If you haven’t seen it yet, you can watch it here at the Consequence of Sound YouTube channel.

Check it out before it disappears again!

Here are a few images to give you an idea.  There is a voiceover to accompany the images and it begins by saying that on the 11th of March 1964 Gene Roddenberry began writing Star Trek with the words “Star Trek is…” 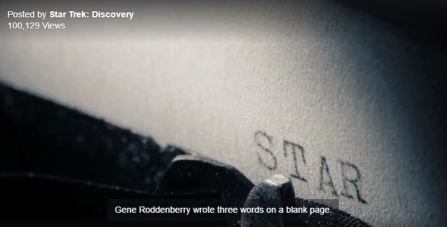 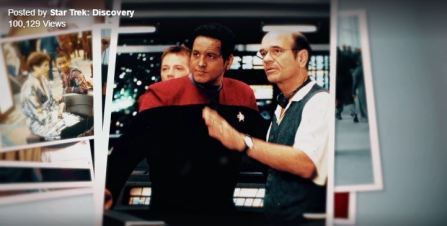 The bottom image above, “Star Trek: Discovery will begin that sentence once again” ties into the voiceover.

The trailer starts with a retrospective look at the various series that went before Discovery, and then gives us some exciting sneak peaks at the design and construction of the new series, and some glimpses of what might be the first day of filming! 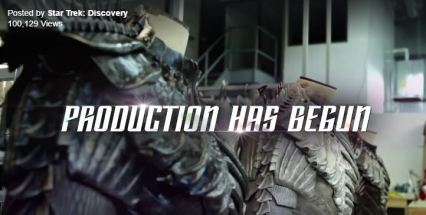 You’ll notice more of the ship design and what looks like the new Starfleet uniform.  Take a moment to examine the uniform – it’s blue with gold piping on the shoulder, but the blue (normally associated with medical and science) appears to be associated with engineering and ops if you look at the middle section of the Starfleet Delta.

Either the series is borrowing a little from Star Trek: Enterprise and giving the crew the one uniform colour rather than the colourful red, gold and blue of Star Trek: The Original Series, and the Delta is being used to discern which department a crew member works in, or pre-Kirk things were a little different.

Those of you who are long-term fans of Star Trek will know that the Delta design was originally only used for the Enterprise, until her successful five-year mission had her honoured, and had her Delta design used for all ships.

Maybe the Delta was always originally Starfleet’s emblem before some in the Admiralty thought each ship and base should have it’s own emblem, which is what we see throughout the original series.  Every ship and every base had a different symbol on their chests.

Finally, you’ll notice a ship that doesn’t look like the designs shown for the USS Discovery, but may be a wireframe of the USS Shenzhou.

The final reveal is the logo, which has changed slightly but still remains split.

That’s a purposeful choice, so it likely means something?  What, I don’t know.

Alternatively, rather than symbolising something breaking or splitting, it could symbolise something coming together and the series could focus on the solidification of the United Federation of Planets and Starfleet.

We could guess forever.  Two things are certain: Star Trek: Discovery has started production, and it looks really promising.

I am crazy excited, and can’t wait to see this new series.