It’s obvious I’m a fan of Space: 1999, so I’ll happily declare there is a bias present in this article.  To me, the show had a lot going for it – compelling characters, amazing sets, decent (for the time) special effects, and a tone of mystery and hope set against a subtle backdrop of disillusionment and mistrust (two feelings that permeated the 1970s, and coincidentally the twenty-teens).

The series was cancelled before its time despite its popularity, with the sad reality being it kind of killed itself with a lot of retooling between seasons that didn’t sit well with its fans.  Space: 1999 is probably the best example of how not to “fix” a television show if you want that show to survive.  Though season two gave us Maya and Tony, it took from us compelling storylines and a handful of fan favourite characters like Paul and Victor.

Space: 1999 wouldn’t work today as an exact and completely faithful reboot, because we’re 17 years past the titular date of 1999, and we also know more about our moon, our solar system and the near galaxy than we did then.  Not to mention the fact scientists are pretty certain that the moon being ripped from Earth orbit would destroy it and our own planet!  But that doesn’t mean we should dismiss this show and it’s underlying premise.  The characters, the (then) future forward but still focused in reality design aesthetic, the message of hope and exploration, and the crew of Alpha’s fight to survive against overwhelming odds (like we are today with climate change, global terrorism, changing political sensibilities, growing poverty, rising unemployment etc) are as relevant to today’s world as they were 40 plus years ago – and perhaps resonate with more potency now than they did back in the 70s.

With the renewed focus on exploring our solar system and the recent focus on space tourism, asteroid mining and setting up colonies on both the moon and Mars, Space: 1999 is more relevant today than it was in the 1970s when it was first released.

No other science fiction property can so eloquently show us the near future as authentically – if the series is retooled effectively and respectfully.

To clarify that point, shows like The Expanse and the new Star Trek: Discovery (due for release in May next year) do and will focus on the issues I mentioned above, but neither do (or will do) it from a timeframe close to right now.  Though Space: 1999 got a lot wrong (we don’t have a moonbase, we’re not dumping nuclear waste on the moon, and we haven’t received mysterious signals from nearby exoplanets), it did do its best to predict what the near future would look like 24 years into the future (and a lot of people still think the set design and ship designs stack up today, with the Eagle Transporter still spoken of as one of the most realistic space ships ever designed). 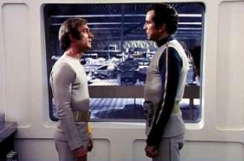 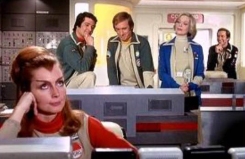 For a show like Space: 1999 that has maintained a strong and loyal fan base for 40 years, there are dangers in rebirthing or rebooting it.  There can also be benefits – a lot of them.  No one can forget the trepidation and then remarkable love many of us felt for the Battlestar Galactica reboot.  Ronald D. Moore kept the premise intact, giving more thought and background to the Cylons than the legendary Glen A. Larson had back in the late ’70s, and he kept many of the characters the same – controversially changing some (Starbuck becomes a woman, as does Boomer, and Athena is no longer Adama’s daughter, but a Cylon) and adding in new characters to flesh out that ‘world’.

Someone seeking to bring Space: 1999 back could go that route, but there are other approaches that would be equally as successful. 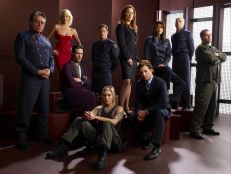 One alternate is the one I ascribe to here on this site, with the budding fan script I’ve been writing.

Space 2049‘s premise attempts to remain completely loyal to the original idea of Space: 1999, but instead of destructively blasting our moon out of Earth’s orbit, which, as mentioned above would be pretty apocalyptic for all of us down on the planet as well as the people on Alpha, it blasts a second moon – an asteroid that was captured by Earth’s gravity – out of Earth’s orbit and sends that second moon on a trip through our solar system toward an anomaly transmitting radio signals toward Earth from Jupiter orbit.

Most of the characters are the same, with one or two added in to reflect the role business will play in space colonisation, and with one or two secondary characters having their races and genders changed to better reflect a diverse settlement.  Overall the premise is identical and follows the thematic tone of the first season of Space: 1999.

As a devoted fan, that to me, makes sense.

While there is only the remotest of chances our homeworld will capture an asteroid and make it a second moon, it is entirely possible according to the research I’ve done.  It’s certainly more possible and less catastrophic than our moon getting ejected from orbit.

For the record, I looked at a space station being blasted out of orbit, but after two weeks of exhaustive research discovered there was NO WAY an artificial construct could survive that sort of catastrophe intact.

A few years back, Jace Hall of V (the reboot) fame attempted to bring Space: 1999 back as Space 2099, but that very quietly fell apart about two years ago.

From what I can find online, Space 2099 was going to honour the original in theme, but not necessarily in any other way. 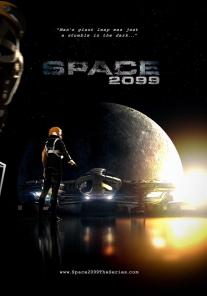 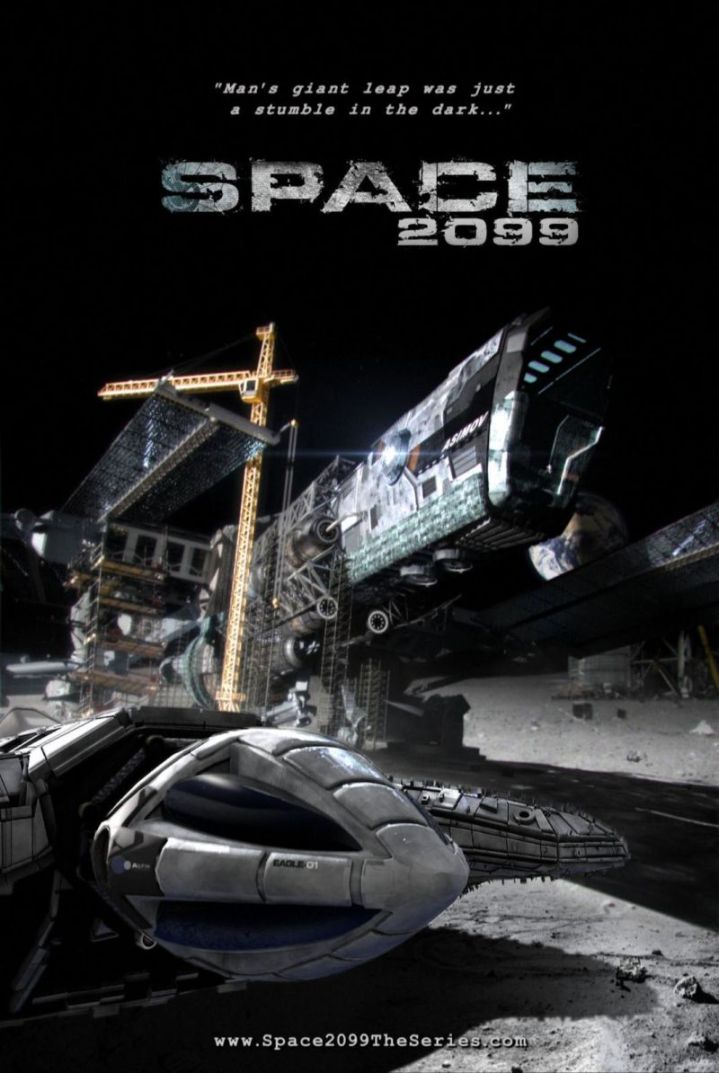 I was a fan of this attempt at a reboot, but admit I would have been disappointed if too much had changed, and would have been really upset if Koenig, Russell and Maya hadn’t featured in it.

The pre-production efforts of the team behind Space 2099 didn’t reveal much to the wider public, though they did actively communicate with us all for a while at the forum on their website, but despite inviting the fans in we don’t know a lot about the show.  What we do know is that the reboot is no more.

Looking at the very few promo images that made it into the public domain, all I – all any of us – can do is guess.  My guess is we would have had a Moonbase Alpha, but there would have been no object blasted out of Earth’s orbit.  I believe they would have used Alpha as a jump point for a ship tasked with exploring beyond our solar system.

Regardless of what anyone might do with a reboot, it really is time for another look at Space: 1999.  Despite the rubbish monster of the week show it turned into in its second season, it was originally an intelligent, philosophical, meaningful show that would be successful right now in the current television landscape. 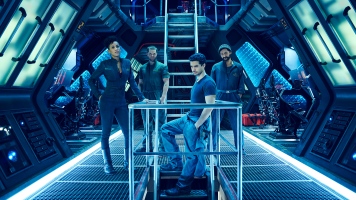 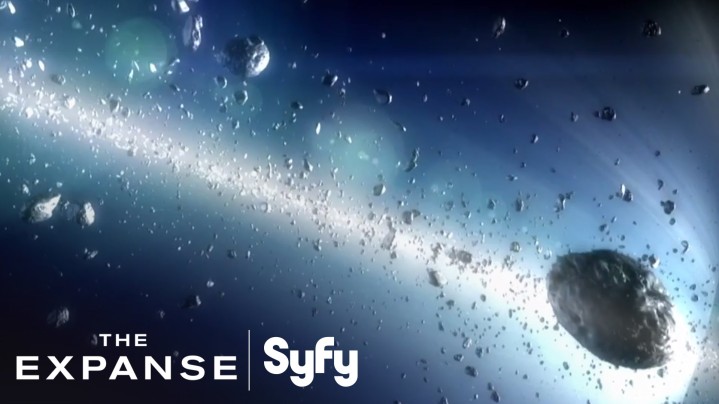 Even with a controversial new President due to take power in the United States in January, and a very unstable global community with issues like Brexit and ISIL featuring in world headlines on a daily basis, it seems clear that NASA and other interests will continue to push toward the moon and Mars.

As our climate continues to change, as our planet’s population continues to exceed our homeworlds’ ability to support humanity, and as our earthly resources continue to diminish, we’ll be forced more and more to focus on space as a solution to our growing global problems.

Has there ever been a better time for a show like Space: 1999 to shine?

A show that looks ahead a few years and poses realistic solutions to growing world problems could be really important, and that postulation could all still happen against an allegorical background of space adventure and fun.

Hopefully someone in TV production land is thinking the same thing.

It’s time for a new look at this old gem.

I wish I knew what derailed Jace’s vision, but more than that I hope someone sees value in a show of this kind and gives Space: 1999 a new life that the fans can love and a new TV audience can celebrate.