Fans were promised new information on the sixth live action television series at this year’s San Diego Comic Con… and CBS did not disappoint.

Executive Producer and showrunner Bryan Fuller, with a little help from William Shatner, Brent Spiner, Michael Dorn, Jeri Ryan and Scott Bakula gave attendees some much anticipated news – not as much as we could have hoped for, but some pretty amazing stuff, including the name of the starship the new crew will be boldly going in.  As you can probably tell from the above image, the new ship is the USS Discovery, and in fine Star Trek tradition the series has been named after the vessel.  The registration?  NCC-1031.

While the sharing of information pretty much stopped there, Bryan and CBS had one more surprise – some test footage of the new ship launching from inside an asteroid base somewhere in the galaxy. 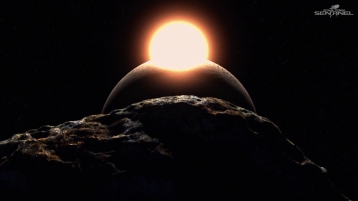 Wide shot of the Discovery in an asteroid based space dock. 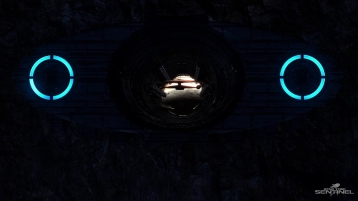 Closer shot of the Discovery in its asteroid based space dock.

The front of the warp nacelles of the USS DIscovery.

As mentioned above, the footage is a test reel, so the graphics aren’t final and are a little less ‘smooth’ than we would usually see on screen, but they are still, never the less, beautiful.  It’s also highly unlikely that the visuals shown come from the pilot episode.

The ship design is, in my opinion at least, amazing… and has some interesting differences to the ships we’ve seen onscreen before.

Exterior shot of the bridge of the USS Discovery.

The USS Discovery through the web of the asteroid space dock. 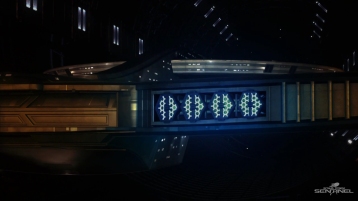 The impulse engines of the USS Discovery coming online. 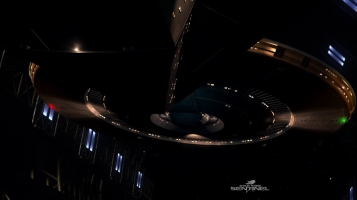 The underside of the Discovery’s command module.

Rear shot of the Discovery getting ready to launch.

You’ll notice in the first five images above, that the front of the warp nacelle’s are unique, with three globes containing energy, instead of the usual one.

You’ll also note that the design of the impulse engines in the second set of five images are very similar in appearance to those seen on the reboot Enterprise.

Wide shot of the Discovery preparing to launch. 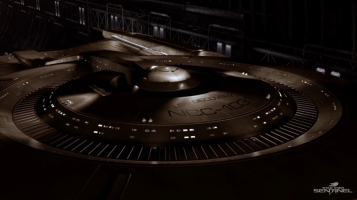 Close up of the Discovery preparing to launch.

When in the prime timeline will the show take place?  It’s hard to tell.  The only real points of reference we can draw from are the ship’s registration (NCC-1031) and the images on the video.

The registration seems to hint at the original series time period or maybe even a little before.  The ship also looks like it could come from the original series or the original series’ movie era, but Starfleet has shown us that it likes to ‘change up’ it’s ship designs, which means there is a possibility the show could come after Star Trek: Voyager.  I don’t get that feeling, though.  The new style nacelle design seems too retro and along with the original series (albeit the reboot original series) style impulse engines everything seems to indicate we’ve gone back to that period in Trek’s history to explore it via another crew’s perspective.  Another design choice that screams pre-TNG can be found in image 12 (the second image in the third set of five photos) where part of the saucer bears a very interesting likeness to the USS Franklin‘s saucer section as seen in Star Trek Beyond.  What also needs to be pointed out is the almost bronze colour of the Discovery.  I don’t remember seeing a Starfleet vessel that colour before.

If you’re thinking the ship looks particularly familiar, you’re not imagining it, the ship is actually based on the original designs done by famed artist Ralph McQuarrie for Star Trek: Planet of the Titans, a movie that was under consideration in the mid-70’s prior to the development of Star Trek: Phase II, the 1970’s television series that eventually became Star Trek: The Motion Picture. 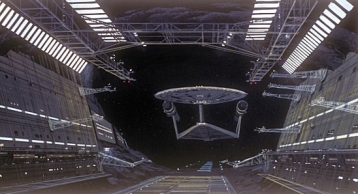 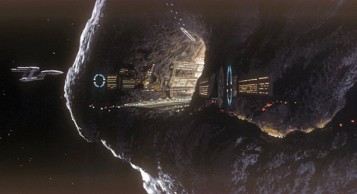 Side view of the USS Enterprise approaching an asteroid space dock – Ralph McQuarrie.

You’ll note from these original concepts that Ralph created, that the Enterprise is exiting an asteroid and that the artists who created the film drew heavily from those paintings to show the first launch of the Discovery and our first look at it.  Being the 50th Anniversary year, I love that they did that.  It’s a beautiful homage.

Heather Kadin, another member of Star Trek: Discovery‘s creative team, has said that the design is not final, and Bryan has said they’re trying to work out how they can use them as they’re around 40 years old and the artist passed away in March of 2012.  It’s also possible the images are owned by Paramount.

I hope they find a way to use the designs, because I love them.  They’re still Star Trek but fantastically retro and unique when compared with all the other ships we’ve seen.  Plus, I miss the circular command module and was never the biggest fan of the spearhead shaped command modules of the Enterprise-E and the Voyager.

The very last piece of news we know right now is that the new series airs in January of next year and has a 13 episode order that will play out in an arc, rather than in the more episodic style of previous series’.

If you’d like to watch the footage shown at the San Diego Comic Con visit the official Star Trek website here or the wonderful TrekNews here.  You can also find the video on most Star Trek news sites on the web.

This is a wonderful way to celebrate 50 years of the most hopeful and inspiring series to ever hit television.

Hopefully more news will come soon.  We’ll most likely start to get some information about the casting process in a month, maybe two at the outside – but I imagine that will come incrementally as a build up to the premiere.  I feel like the next bit of big news we’ll get will be a confirmation of when in the prime timeline the series will be set.

Honestly, whatever news they drop next is going to make me happy.  I don’t care how apparently inconsequential!  If they just release an image of the new insignia I’ll probably be grinning with excitement.

I’m READY for this series.

Thank you, CBS and Bryan Fuller for whetting our appetites.

So excited for January!