The Quest for Artificial Gravity

One of the holy grail’s for space travel is the creation of artificial gravity.

Why?  Because of the potential deleterious effects of space travel on the human body.

A great deal of energy has gone into researching the effects of micro-gravity on human beings, with a considerable amount of that research happening on the International Space Station in recent months.  That research is still ongoing, but what it’s shown us, to date, is that there are negative impacts on our musculature and possibly our internal organs.

Good question.  Gravity, as you hopefully know, is the force that governs motion throughout the universe, and it’s that ‘thing’ that holds us to the surface of our planet.  Gravity also keeps the moon in orbit around the Earth, and our beautiful planet in orbit around the sun.

There’s a popular perception that gravity doesn’t exist in space, however that’s not entirely true.  Gravity is still a force to be reckoned with once you pass through the Earth’s Thermosphere and Exosphere.  It’s the Earth’s gravity that holds the ISS, any space craft we launch to zoom around our planet, and our satellites in orbit (along with some help from the OMS – Orbital Manouvering System and RCS – Reaction Control System engines that help to correct for orbital instabilities).  To reach a point in space where the Earth’s gravitational affect is zero, you would have to travel quite a way… and then even further to be free of the sun’s gravitational field (3.7 BILLION kilometers).  Even then, you would not be free of gravity completely and would have to contend with the gravity field of the Milky Way galaxy. 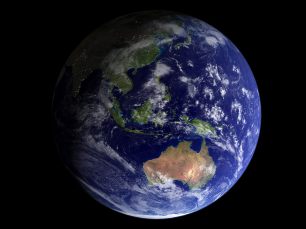 The Earth from Space, showing Asia and Australia.

Sol with a focus on a solar eruption (flare).

Part of the Milky Way as seen from Earth (Devil’s Tower, Wyoming in the United States of America).

So, because some degree of gravity is almost everywhere, the more correct term is microgravity, not zero-gravity.

Currently, we have no artificial gravity on any space craft or station, and the brave souls who go into space float around in microgravity.  We have the ability to create artificial gravity right now, it’s just prohibitively expensive.

Sadly, not the sort of artificial gravity you see on Babylon 5, Star Trek, Space: 1999 or most other scifi productions.

In most popular science fiction movies and TV shows, artificial gravity is shown as a given and is this sort of pseudo magical thing that has no clear basis in science – and this is mostly to save on special effects and time, because filming actors in simulated microgravity would be prohibitively expensive.

To the credit of Space: 1999, Star Trek and Babylon 5 and some other television series’, the creative staff do make an attempt to explain why their characters can walk around a spaceship or a space station without floating all over the place, but those explanations are often based on alien intervention or way out science that’s nothing more than barely sensible technobabble.  Babylon 5 came the closest with the titular station spinning to create centrifugal force, as did some of the Earth Forces ships.  2001: A Space Odyssey and Elesium also used centrifugal force for Space Station V and the Elysium station and did their absolute best to be scientifically accurate.

Computer diagram of a Gravity Generator from Star Trek: The Next Generation.

In Space: 1999 artificial gravity is used on Alpha and inside the Eagle Transporters, and the concept is introduced by Professor Bergman in the episode “Black Sun”.  Bergman describes eight towers that essentially create an artificial gravity field around Alpha… but that field, for reasons no one knows, only exists inside Alpha and disappears when the station crew leave the base but are still in range of the field.

In Star Trek artificial gravity is generated by a series of devices that don’t require something as expensive and essentially unwieldy as centrifugal or centripetal force.

An Earth Forces ship with rotating section to create gravity.

The space station Elysium from the film of the same name.

To create artificial gravity right now, with the technology we have available, would suck up ten or so years worth of the world’s aluminium, and the cost of launching the various parts into space to create a rotating space station big enough would be exorbitant.

If you’re interested in learning more, Real Engineering has a wonderful explanation on their YouTube channel.  They get all the info out in a far more measured and accurate way than I could ever hope to.

The video isn’t very long, and if you’re interested in the future of space exploration it’s a fascinating watch.

Check it out here.