Elon Musk is an ambitious and inspirational human being, and he’s never minced words when it comes to his aspirations for SpaceX, the company he founded and is CEO of.

In recent days, Elon has elaborated on his aspirations to send a crew to Mars, and his timeline for making it happen – with, or without NASA‘s help.

He plans to start sending unmanned craft to the red planet starting in 2018, to be followed by the launch of a much larger craft in 2024 that will hopefully be crewed by the first human beings to ever step foot on the surface of our nearest neighbouring planet.

In-between the first unmanned flights and the eventual flight that will take human beings to Mars, he hopes to send regular spacecraft, approximately every two years, to essentially establish a “cargo route” that will set up the supplies a potential outpost or colony will need.

Is NASA involved with this ambitious project?

It doesn’t seem so.

NASA‘s earliest estimates for a manned Mars mission have them landing a craft sometime in 2035.

How can Musk’s SpaceX do this a decade before NASA?  Maybe because it’s privately funded and therefore doesn’t have the same restrictions that are often applied to government supported projects.

When you look into SpaceX there are some impressive private companies supporting them, including Google (who pretty much want to own a slice of everything).  Thanks to the diverse investors and their quality as companies, SpaceX was recently valued at 12 billion dollars – which is impressive, particularly for a company that’s only been around since 2002.

SpaceX has enjoyed a number of successes, but has also survived it’s fair share of failures.  Elon’s tenancity and vision has kept the company going and literally reaching for the stars.

Is SpaceX just about launching an eventual manned mission to Mars? 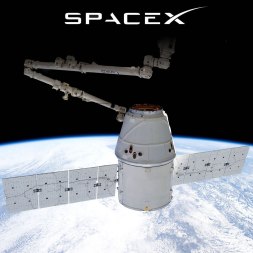 Among its goals, it lists creating a string (or constellation) of satellites that will circle the Earth and ‘beam’ the internet into every part of our globe so that anyone anywhere can have access to the web.

They have also been instrumental in advancing rocket technology (as a side note for science fiction fans, SpaceX‘s first rocket, the Falcon, was named for the  Millennium Falcon from Star Wars – he is a child of the 70s after all).

That, and their ambition to lower the cost and improve the reliability of space travel make them a company to watch.

When you read about Elon and think about Richard Branson you can’t help but wish they would get together.  Imagine what could happen if both men pooled their considerable resources?

Back in the early 1970s, when Space: 1999 was developed, I don’t think anyone imagined that private companies would lead the way when it comes to colonising our solar system, but it seems that may be the case.  With companies like Virgin Galactic and SpaceX pushing the envelope and establishing audacious goals, the first Moonbase, and the first Mars Colony might be owned by private firms that rent space to governments rather than the other way around!

That does actually concern some people and it’s only wise to wonder and ask why private companies want to get to the Moon and Mars?

I think, for men like Richard and Elon, it’s a mix of things.  Vision.  Altruism.  Potential financial benefit.  For many of their investors, I have little doubt it’s about one thing.  Resources.

There’s potentially a lot of money in the form of mineral resources on Luna, Mars and in the asteroid belt, and as Earth’s resources continue to diminish but humanities need for them continues to grow, it’s only logical to look elsewhere and to invest in new opportunities.

If you want to read more about Elon’s ambitions for Mars, visit Blastr here.  To learn more about SpaceX, check out the collection of information on Wikipedia here.

The emergence of companies like SpaceX and Virgin Galactic creates an interesting future for all of us.  Whether NASA and other government linked space agencies are going slow because of safety concerns or lack of funding, it seems clear that the future of space travel will be the purview of private companies.

That’s certainly a factor I’ll be weaving into my fantasy fan reboot of Space: 1999.

Half of me is deeply concerned by the privatisation of space (can you say Weyland-Yutani?) and the other half is excited.  Thankfully, I think both Elon Musk and Richard Branson are men to be admired, and so maybe, hopefully, the future of space travel is safe in their hands.

These days, we can probably trust them more than we can our governments!