When I started this blog, my big hurdle was the simple fact no new episodes of Space: 1999 had been produced in about 40 years, and the planned sequel, Space 2099 was never made.  While I’d be doing my own “fan-take” on a new series, that wouldn’t happen over night, so I decided the blog would feature retrospectives on Space: 1999, interesting developments in science that might lead to a settlement on the moon or Mars, and features on those shows that shared the same spirit as Space: 1999.

One of the things many a Space: 1999 fan loved about the series was it’s focus on the metaphysical and philosophical, as well as the scientific.

1999 postulated, in its first season, that there was an intelligence at work in the galaxy that was influencing the direction of Moonbase Alpha as it plunged from one end of the galaxy to the other.

While that focus was largely lost in the second season, it is something many fans remember.  In fact, many fans blame the cancellation of the series on that loss, and believe Space: 1999 would have continued if season two hadn’t changed the premise of the show so dramatically.

Thankfully, about 18 years after Space: 1999, another brave series decided to add some metaphysics and philosophy into its story-telling, and create a science fiction show that wasn’t just about futuristic science.  Babylon 5.

That metaphysical ‘feel’ changed as the series progressed, but it still posed important questions about humanity and the constructs of faith and power and didn’t often give easy answers to the issues raised.

Babylon 5 was created by J. Michael Straczynski, and aired across five years from 1993 to 1998, starting with the two hour movie “The Gathering” in 1993 before the first season commenced airing in 1994 with the episode “Midnight on the Firing Line.”

J. Michael Straczynski envisioned the show as one long novel, and considered each year of the five year saga a chapter in that book.

Season one (chapter one) was titled “Signs and Portents” and dealt with the Commander of the station, Jeffrey Sinclair, discovering what happened to him during ‘the Battle of the Line’, while introducing a host of fascinating characters and building on the eventual discovery of a dangerous enemy.

Season two (chapter two) was titled “The Coming of Shadows” and introduced us to a new Commander of the station, John Sheridan, after Michael O’Hare (the actor playing Sinclair) left the series.  Reader Starfury7, recently (Sep 2019) reminded me why.

Michael had been privately suffering from a condition known as Delusional Disorder.  It’s a rare mental health issue sometimes mistaken for schizophrenia.  J. Michael Straczynski knew about O’Hares condition, and at the actor’s request kept his illness a secret.  Straczynski did offer to suspend production on Babylon 5 so that Michael could undergo treatment, but O’Hare refused.  He didn’t want to jeapordise the show or his colleagues jobs.  Instead, actor and show creator decided to write the character out of the second season, leaving an opportunity to return as a guest star should Michael be up to it.  Michael did return for the excellent “War Without End” parts one and two, but sadly never recovered from his illness.  Straczynski promised to keep Michael’s secret until after Michael passed, at his request – and was faithful to his word.  O’Hare wanted the fans to know, because he genuinely loved them, but didn’t want his condition to effect his career.  If you’d like to know more about the relationship between J. Michael Straczynski and Michael O’Hare during the production of Babylon 5, click here.  You can also watch an interview with Straczynski about O’Hare here. Thank you, Starfury7, for the reminder and the inspiration to come back and add to this old article.

Season three (chapter three) was titled “The Point of No Return” and focused on Earth as it fell under the sway of a dictator, as Delenn and John Sheridan set about creating a ‘conspiracy of light’ to fight the darkness permeating the galaxy in the form of the Shadows.

Season four (chapter four) was titled “No Surrender, No Retreat” and pushed our heroes to extremes as the conflict between the Vorlon and Shadows threatened to wipe out billions of lives.  As Delenn and the Minbari stepped up to lead the forces of light as the most powerful of the young races, Sheridan decided he had no choice but to attack his homeworld and overthrow a government he no longer believed in to save humanity from the machinations of a madman. 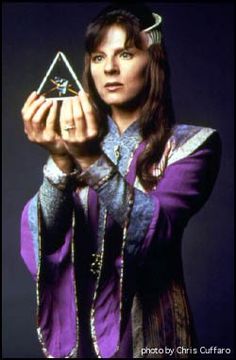 Season five (the final chapter) was titled “The Wheel of Fire”.  It was here that Babylon 5 kind of went off the rails for a little bit.  As season four played out, J. Michael Straczynski didn’t know if his show would be renewed for its fifth and final season.  As a result, he rushed the conclusion of the Shadow War, and when renewal came had to shift the show’s focus to a few other concepts to complete his five year vision.

The season went from weak to strong, and finished with a literal bang.  The weak?  The telepath war which began the season.  Watch it, and you’ll see that the episodes featuring the telepath issue weren’t the series’ strongest.  As the season progressed, it introduced a new threat and focused heavily on the fallout from the end of season four and the series became brilliant again.

Babylon 5 the series ended with the amazing episode “Sleeping in Light” – one of the most beautifully written and impressively performed season finales in history.  “Sleeping in Light” was filmed at the end of season four (just in case), and when the series was renewed the episode was held until the actual close of the show. 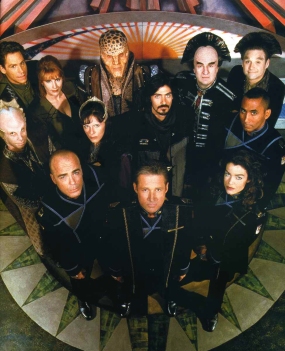 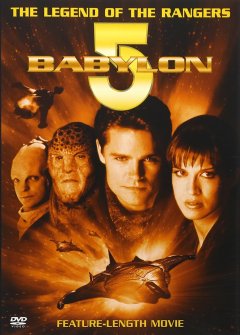 As well as five seasons, Babylon 5 also created a series of movies along with two spin offs – one that lasted one season (Babylon 5: Crusade) and one that never made it past the pilot stage despite the fact it was actually an excellent idea (Babylon 5: Legend of the Rangers) and was wonderful to watch.

The films were by and large good, with the first two being exceptional: Babylon 5: In The Beginning and Babylon 5: Thirdspace.  The third film, Babylon 5: River of Souls wasn’t as strong as the previous two films and the fourth film, Babylon 5: A Call to Arms, was okay, but served more as a pilot for Crusade. 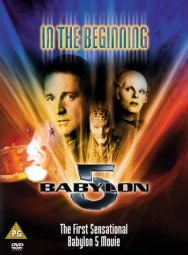 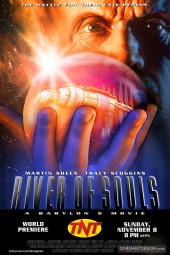 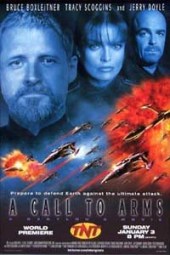 A fifth film was produced as a concept for an anthology series – Babylon 5: The Lost Tales.  Lost Tales was planned to be the first of many anthology editions, but no more were made due to funding issues.

Babylon 5 was an extraordinary series that tackled intense and meaningful themes, and many of them were similar to the themes tackled in Space: 1999 – free will and order versus chaos, religion and spirituality, politics and the abuse of power.

At the time, Babylon 5 was known as “the anti- Star Trek“, much as Space: 1999 had been, and both shows shared very similar fan wars with Trekkers. 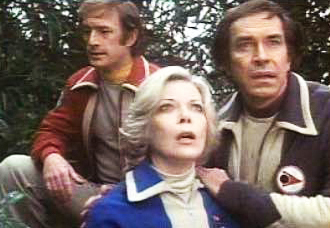 Babylon 5 was, and for many of us today, still is a phenomenon.

Despite some really bad sets, everything else about the show was fantastic (I still can’t work out why the doors were such a ridiculous shape).  The special effects were revolutionary for the time with B5 being the first show to embrace computer generated imaging.  The acting was first class, the directing was often inspired, and the writing was unlike anything science fiction television had ever seen.

The creator of B5, the amazing J. Michael Straczynski, also engaged the internet like no one ever had before (way before social media), and it was, arguably, this and the connection he built with his fans, that kept the series alive.  Of note, Straczynski also wrote most of the episodes of the show – which is huge and at the time, unheard of.

If you love science fiction and haven’t watched Babylon 5, you need to.  It is a sci-fi masterpiece.

You can pick the series up on Amazon, or find it in any good DVD and Bluray store.

The Lurker’s Guide to Babylon 5