Breakthrough Listen focuses on our ongoing search as a species, for extraterrestrial life.

Breakthrough Starshot focuses on exploring space beyond our star system, with a particular focus on Alpha Centauri.  By using a number of nanocraft, a ground-based light beamer, and light sails, it is believed these small unmanned craft could reach Alpha Centauri in approximately 20 years, sending exploration information on the journey, and on Alpha Centauri, back to Earth.

Breakthrough Message focuses on creating the right message to send out about Earth and humanity to possible extraterrestrial allies.  What words and sentiments do we want alien life to see, listen to and read about us?

Recently, Yuri announced both Breakthrough Starshot and Professor Stephen Hawking’s involvement in it, to the wider world, saying “We can do more than gaze at the stars, we can reach them.”

Yuri has donated 100 million dollars to the feasibility study needed to start the project, stating it will need a lot more money to execute.

Professor Hawking has been involved with Breakthrough Initiatives for a while now, having come on board to be a part of Breakthrough Listen.

The recent announcement was met with enthusiasm by the wider scientific community, many of whom were on hand for the announcement of Starshot and Professor Hawking’s involvement. 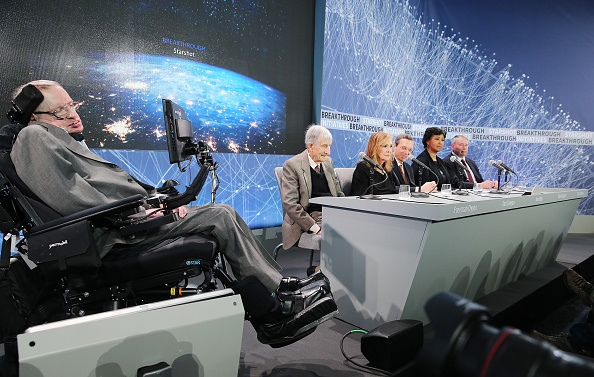 To read more about the announcement of Breakthrough Starshot, click here to read the phys.org article.

It’s exciting to see the scientific community pushing us forward toward the future.  It’s past time we embraced our ability and, perhaps, our destiny, and reached for the stars.