The team behind the new independent Star Trek series, Renegades, are kicking goals in a big way!

Not since Star Trek was being produced professionally for television, and not since the amazing Star Trek fan film Of Gods and Men, has there been such a remarkable collection of Trek-talent gathered together to produce a quality science fiction show for our viewing pleasure.

We still don’t have a complete picture of what the next two episodes of Renegades will bring, but we do know that episode three features the possible demise of Admiral Chekov (Walter Koenig has said that episode three of Renegades will be Chekov’s ‘swan song’), and that we’ll be seeing Commander(?) Chakotay and Jadzia Dax again (at least it sounds like Terry will be reprising her role as Jadzia when she guest stars).

Now, in another media release from the Renegades team, we’ve learned that Cirroc Lofton, who played Jake Sisko in Star Trek: Deep Space Nine, will also be joining the cast and reprising his role as the son of the Emissary.

But that’s not all!  Renegades has recruited some truly legendary behind the scenes support for the first season of their internet TV series.

On October 21, the Renegades team announced that Melinda Snodgrass will be returning to televised Star Trek after a 25 year absence.  If you’re saying to yourself “that name’s familiar…”, you might have seen her credit on a little episode called ‘Measure of a Man’ (among others), which first aired in 1989 as part of the second season of Star Trek: The Next Generation.  You might have also picked up a book she wrote called ‘The Tears of the Singers’, published in 1984 as part of the TOS crew’s novelised adventures.

As if that wasn’t enough, there is one more Trek-alumni joining the crew and this announcement will hopefully set your Trekker-hearts a flutter!

Andrew Probert.  Andy is a living science fiction legend.  His first film and television work was done way back in 1978 on the mini-series Battlestar Galactica, he contributed to the design of the Cylon centurions and worked on one of the physical spaceship models for the Colonial fleet.  From there, he was hired to work on Star Trek: The Motion Picture and helped design the beautiful new USS Enterprise, which is still one of my all time favourite starship designs.  Of particular note are his designs for the bridge of the Klingon battlecruisers.  His work essentially set the style for the design of future Klingon vessel interiors.  His career has been long and varied, and he has contributed to shows like Airwolf, and films like Back to the Future, Space Camp, Tron, The Philadelphia Experiment, and more.  He is, to Trekkers, best known for his work on Star Trek: The Next Generation where he designed the bridge of the USS Enterprise D, the Ferengi Marauder and the Romulan Warbird (which is arguably still one of the most unique ship designs in Star Trek). 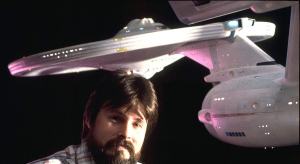 Melinda will be writing episodes two and three of Renegades (to begin with), and Andy Probert will be lending his exceptional conceptualisation and design skills to the production.

There’s no word on how long Terry Farrell, Robert Beltran and Cirroc Lofton will be appearing in Renegades, but hopefully it’s for a long time.  Jake’s character in particular, had an amazing story-arc and as the son of the Emissary to the Bajoran people, there are some incredible story opportunities still to be explored with that character.

Thank you, Renegades team, for recruiting such outstanding talent to your production.

Now… if you could just let slip some more details about the upcoming two episodes I’d be a very happy fan.

If you’d like to learn more about Cirroc Lofton and his career, you can do so at his Wikipedia page here and his IMDb page here.  Something you might not know about Cirroc, is that he starred in Star Trek: Of Gods and Men a few years back, as the Vulcan Sevar, so he is quite familiar with the production team behind Star Trek: Renegades.

If you’d like to learn more about Melinda Snodgrass, you can do so at her official website here, her Wikipedia page here and her IMDb page here.

If you’d like to learn more about Andy Probert and his career, you can do so at his official website here, his Wikipedia page here and his IMDb page here.