If you’re a fan of Star Trek: The Next Generation, you’ve probably wondered why Gates McFadden suddenly disappeared at the end of Season One, only to reappear at the beginning of Season Three.

I was a young teenager when it all happened, and an avid reader of the old Starlog magazine and I can still remember the furor that erupted.  Trek fans were super pissed.  While a lot of fans embraced Diana Muldaur’s excellent portrayal of Doctor Katherine Pulaski, many more wanted Gates back.

There have been all sorts of rumours over the years as to why Doctor Crusher was removed from the show, ranging from the producers wanting to give Picard multiple love interests, to the writers not knowing how to handle storylines for a mother and son, to a personality clash with one of the producers.

To Gates’ credit (and a sign of her professionalism) she’s never openly commented on any feud or disagreement that happened behind the scenes. 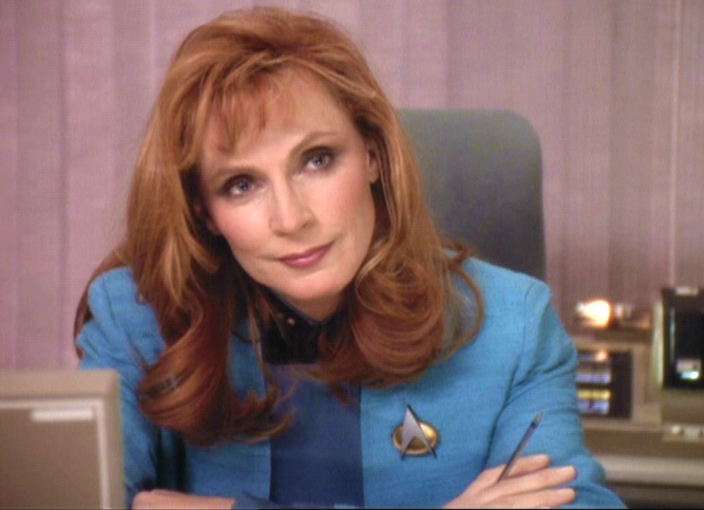 The first two things a lot of fans thought was that Gates, like Denise Crosby (Tasha Yar) left because Beverly Crusher didn’t get a lot to do.  The second, that there had been tension on the set between the actors.  That rumour was quickly phasered to death.  The friendships between the main cast were new, but fierce, and Patrick Stewart showed that beautifully by fighting to get Gates back.  When she was eventually asked to return, she refused, and it was Patrick who persuaded her to give TNG another try.  Thankfully, Gates said yes.  The fans were happy, but we were mystified.  Something had happened but we didn’t know what.  As the years went by we were left believing we would never know the truth.

The truth is, it would seem, finally here… thanks to the great Captain Kirk himself, William Shatner.

The Shat is getting ready to release a brand new Trek documentary called Chaos on the Bridge that focuses on the tumultuous first three years of Star Trek: The Next Generation.  The reviews are pretty good, though apparently it is very critical of Gene Roddenberry.  From all reports it sounds like the Shat has dug up new information no fan has ever seen or heard before.

Michael Hinman’s 1701News has more on the documentary and the answer to who drove Gates away, and why she returned right here.  As a fan of Doctor Beverly Crusher, it’s nice to finally know what happened.  I’m a little saddened by it all because I respect the work of the person who didn’t like Gates – but as this documentary shows, you can’t always get along with everyone and sadly, in TV land, producers hold a great deal of power.