At the May 20 special Star Trek event to celebrate the 50th Anniversary of the science fiction phenomenon, Trek Producer and reboot writer/director J.J. Abrams  announced the end of the lawsuit against Star Trek: Axanar.

As of today, 23 days after the announcement, it still appears this is so, despite some speculation CBS might continue the lawsuit alone.

According to J.J., in his opinion and the opinion of Star Trek fan and Beyond director Justin Lin, a lawsuit was not an appropriate way to deal with any fan.

“The fans should be celebrating this thing. We all, fans of Star Trek, are part of this world.”

As J.J. filled in the attendees at the special Star Trek event, he mentioned both Paramount and CBS were going to create guidelines for fan films to follow so that a lawsuit would (hopefully) never again divide the powers that be and the community of Trekkers who are all, in their own ways, invested in Star Trek.

Not long after the announcement broke, Alec Peters, the man behind Axanar, attempted to bring together a number of fan film representatives to develop their own fan film guidelines to recommend to Paramount and CBS… but that apparently didn’t go down so well.

Whether well-meaning or not, Alec’s attempts upset some people.

Regardless of what the guidelines might be, it appears Axanar is off the hook and hopefully this means that this much anticipated feature length movie can now finally get made in some form.

As a Star Trek fan and a fan of the films that some Trekkers create, I’m relieved this is finally in the process of being resolved.  The 50th Anniversary of Star Trek should be about all of us celebrating this remarkable collection of films, televisions series’, books, comics, fan films and other fan efforts.  It shouldn’t be about recrimination and accusations, confusion and anger.

Did Peters infringe on the copyright owners of Trek?  Maybe, but at the same time there were no guidelines in place to help him avoid what happened.  Has he infringed in a way that’s different from other fan led productions?  That’s a little harder to work out.  Toward the end of the debate the main focus seemed to come down to merchandise, semantics and the fact he paid himself a wage. 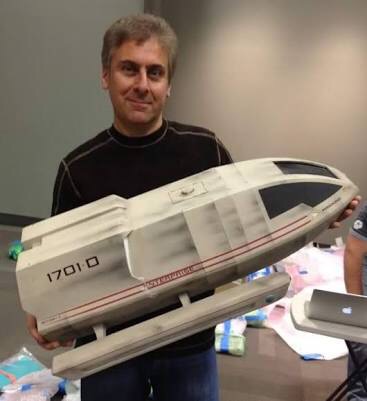 Though many other fan productions have used aspects of the mythology – and some extensively, none have proved to be as contentious as Axanar.  For as many supporters as Peters has, he has managed to gather as many detractors.

All of this beckons the question did CBS and Paramount over react by issuing a lawsuit on Alec and Axanar?  I don’t know.  Part of me thinks they did, part of me, as a professional in the entertainment industry, thinks they acted appropriately to protect their IP, but… I do believe they could have prevented this and the resulting anxiety that ended up permeating the fan film community.  Fan films have been around for a long time, and there has been ample opportunity to put some clear boundaries in place.

I’m afraid no one comes off looking particularly good in any of this, but now, thanks to J.J. and Justin we can move forward.  Hopefully, we can spend the last five and a half months of this year putting these last seven months of uncertainty behind us, and do what we should have been doing all along – celebrating Star Trek together.

If you’d like to read more about J.J.’s announcement and the steps he and Justin Lin went to in their attempts to end this challenging and disruptive period in Trek history, click here for more information from 1701News, or visit Star Trek: Axanar to hear it from the horses proverbial mouth.

If you want to stay up to date on what the new fan film guidelines might be, I recommend you bookmark 1701News and Axanar Productions.  Regardless of how you feel about either of these sites, they have had the best coverage on the lawsuit.  Another site you might want to throw into Google is ‘Axamonitor’ which has been both praised and criticised for its aggregation of news content on the issue.

Now, let’s focus on what’s most important in the Trek community this year…

May Star Trek live long and prosper, and may the upcoming Star Trek Beyond be one of the most successful Trek films in History.

Star Trek Beyond warps into cinemas on the 22nd of July and the film was scheduled for release this year as part of the 50th Anniversary celebration.

Star Trek Beyond was written by Simon Pegg and Doug Jung, was directed by Justin Lin, and produced by J.J. Abrams.