Eight of the Best

News about Star Trek has ground to a halt over the last few days, at least it seems that way after the almost constant bombardment of Star Trek Beyond information out of Dubai and the almost daily updates about Trek alumni being recruited to work on Star Trek: Renegades, so I thought it might be time to do something I’ve been planning to do for months – throw up a post about some of the great Star Trek sites out there that you, my fellow fans, can visit.

It’s probably best to start with the most well known:

This used to be quite an informative site with heaps of ways for Star Trek fans to engage and feel a part of the franchise.  It still is an informative site, but it has undergone a number of changes over the years, particularly after Star Trek: Enterprise went off the air, and especially around the time the reboot movie went into production and CBS and Paramount Pictures divided up the franchise between them.

The site is regularly updated and has some great feature articles, plus a pretty impressive (but slightly frustrating) database of information.  The database is frustrating becaue it’s only divided into categories (aliens, cast, characters, creative staff, episodes, food, places, science & medical, ships and technology) and then everything from every series and film is listed alphabetically.  It would be a little easier if we could drill down to series or film specific information, and then use the existing categories.  If I want to find out about a particular ship, I don’t want to go to ships and then scroll down through every vessel ever shown in every Star Trek series and film to find it.  If I knew it appeared in Wrath of Khan, I’d like to just hit the Wrath of Khan link, then the ships link, and then look at the results.

That’s nit-picking… I know!  Regardless of how the database irks me, I’ll always have a soft spot for the official site.

One last thing fans might want to know, is that you can buy official merchandise through StarTrek.com and some it is quite good.

Now, let’s go from the most obvious, to the least obvious… 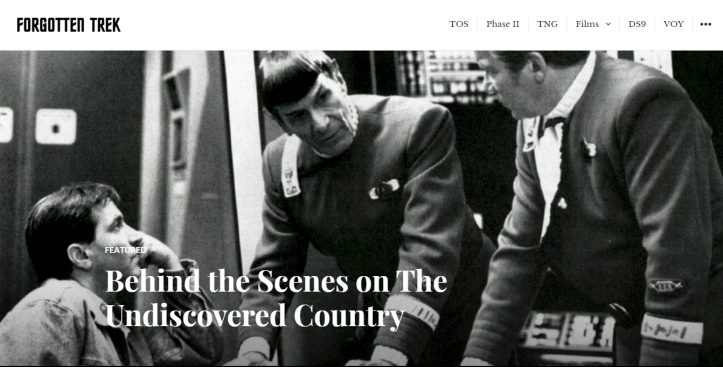 Forgotten Trek is quite unique when it comes to Star Trek sites, and it’s possibly one of my all time favourite websites to visit.  Rather than all the latest news on all things Trek, it focuses on exploring little known facts about every Star Trek series and movie, looking at the actors, the crew, and the ups and downs of production.

If you have the time to explore Forgotten Trek, I encourage you to do so.  I’ve often come across little tidbits that I’d never known, and have frequently been reminded of things I’d learned years ago but forgotten.

One of the many informative articles on the site is about the crazy time everyone had on Star Trek: The Motion Picture as it transitioned from Star Trek: Phase II to a full blown movie.

That, and everything else at Forgotten Trek, is well worth a read.

Next up, we’ll look at some of the most popular and regularly updated sites.

TrekToday is one of two sites to go to for the most up to date information on Star Trek books, comics, movies and reviews.

It’s a great site, though some of the articles can be a little on the brief side.  My personal favourite part of TrekToday is the reviews section.  The person who does most of them is Michelle Erica Green, and she’s an insightful writer.  I’m often left with a different opinion on an episode than I’d originally had, and it’s always interesting to hear her perspective.

If you’ve been reading my blog for a while, you know that TrekCore has become my go-to site for news on Star Trek.  I love this site.  These guys go way above and beyond the call of duty to keep Trek fans up to date on the shared-Universe we all love.

As well as the latest news on Star Trek Beyond, TrekCore frequently features rare images from the various Trek productions, and they do some outstanding comic and book reviews.  I discovered the NextGen, Voyager and Enterprise relaunch novels through TrekCore, and became an instant fan of those books. 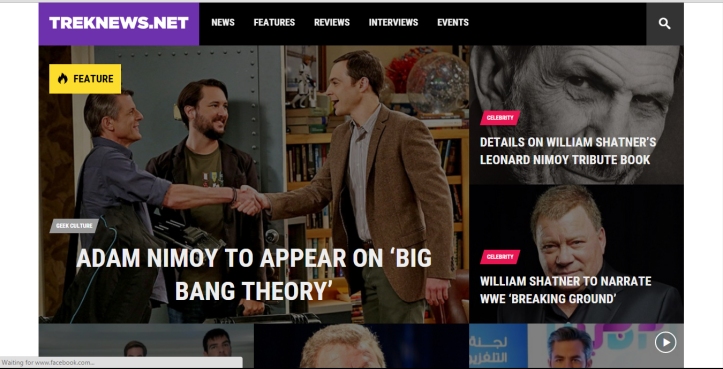 I really like the look of this site, as well as the content.  It’s not the most frequently updated (it is updated regularly), but it releases fantastic articles and it’s never boring to read.

As with many Trek sites these days, TrekNews fill out a lot of their posts with things like ‘this Trek actor is appearing in that show’, which is interesting, and they’re very on the ball with updates around Star Trek Beyond, but if I had to choose a favourite section it would be their interviews page.  They go to great pains to track down people involved with ‘Star Trek’ and interview them for our reading pleasure. 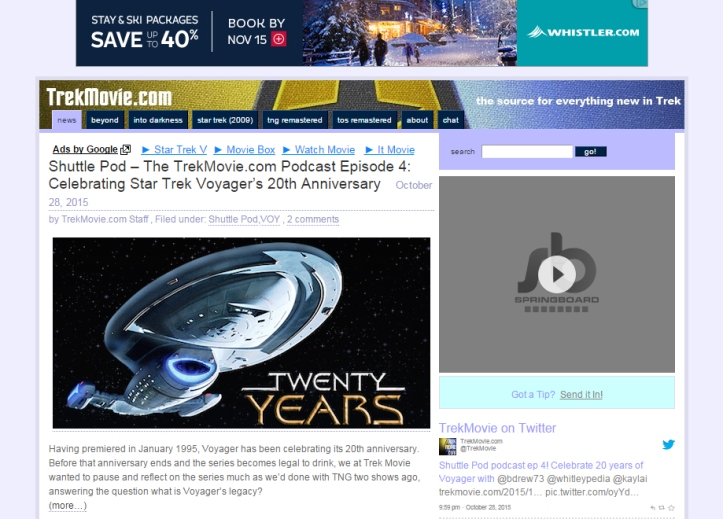 Another great site, but one that isn’t updated as regularly as it used to be.

As with all Star Trek fan sites and news sites, it covers a lot of what is happening in the universe of Star Trek, and it can now and again have some great opinion pieces and I enjoy reading that stuff.  Whether I agree with an opinion or not, I love to see and hear what other Trek fans think and feel about an episode, a product, a convention they attended or whatever.

1701 News is part of the ‘Genre Nexus’ group of sites that includes a general sci-fi news site called AirlockAlpha.  These sites are run by professional journalist Michael Hinman, of whom I’m a fan.  The reason this site (and AirlockAlpha) frustrates me, is because though the articles are thoughtful and informative (because Michael has a lot of industry connections), they’re not updated frequently.  Obviously with a busy day job, that’s a hard thing to do, so I get it, but I do wish there were more regular articles posted.  It sucks when you find a site you adore, and it posts in random bursts rather than with a regular flow.

Still, 1701 News is always on my daily list of sites to check over my morning coffee.  I’ve been following Michael’s work as a writer for a long time, since way back when his site used to be called ‘SyFy.com’ before the Syfy Channel purchased the name from him.

Even though the two sites of his that I love aren’t updated regularly, when he does post an article it is always worth reading.

Like some other Trek sites, 1701 News features a podcast section and lots of other Trek related information, so it can be fun to visit and just read or watch stuff.  I highly recommend checking it out.

Last, but not least, we have MemoryAlpha.

If you want to know anything about Star Trek, this is the site you go to.

Now part of the whole ‘Wiki’ phenomenon, Memory Alpha is sadly subject to a lot more ads that the original website used to be, but there is no where else on the web that has more comprehensive information on Star Trek.  It’s information is even better than what you can find on the official ‘Star Trek’ website.

I can’t heap enough praise on Memory Alpha and its contributors.  I can lose myself for hours in it if I’m in the mood to look things up.

Because it’s a ‘shared site’, by virtue of being a wiki, the quality of each article can differ slightly, but everyone involved has obviously put a remarkable amount of effort into uploading data, and maintaining and updating that data and, thankfully, we Trek fans are religiously devoted to detail, so the information is usually accurate to within a micro-millimetre of it’s life!

If you’re a Star Trek fan, this site really needs to be permanently bookmarked on your device.  Even Simon Pegg, who plays Scotty in the reboot films and who co-wrote Star Trek Beyond, used this site to write the film.  That’s a pretty incredible endorsement.

That’s my pick of the top eight Star Trek sites on the web right now.

There are, of course, hundreds (probably more) of other Star Trek sites, but not all of them are regularly updated, and not all of them feature the variety or quality of content that each of these do.

If anyone wants to recommend a site and would like me to feature it, please feel free to let me know in the comments section below!