Based on STAR TREK created by Gene Roddenberry

The following is one fan’s view of what a pilot for a new STAR TREK television series might look like… because everyone needs a hobby.

Please note this document is not in a standard script layout as WordPress does not support that format.

INT. STANDARD CREW QUARTERS
The camera’s POV is through a window.  This isn’t immediately apparent to the audience.

The quarters are dark with lights flickering and a faint haze of smoke in the air.  In the strobe like effect of the flickering lights, images of personal possessions can be seen. In the background, in an adjacent room, part of a bed is visible.

A man and woman can be heard breathing in quick, panicked gasps.  The sounds are coming from off camera.

A heavy banging echoes through the room, followed by the sound of tortured metal being twisted and torn.  Then silence, except for the faint whir of mechanical gears.

The woman screams, her voice cutting through the man’s yelling.  Phaser fire is heard and brief flashes of warm orange light splash against the walls.

Suddenly, a woman in a Starfleet uniform backs into the shot.  She is obviously terrified.  She raises a phaser and fires two shots, backing out of the shot.

There is a long beat where nothing is seen.  Quickly, unexpectedly, a man runs through the shot toward where the woman went.  Then nothing.

Without warning, the woman’s face fills the screen as it is smashed into the window (camera).  Her head is twisted to the side by a grey, corpse coloured hand, so that her cheek is held against the window.  The one eye that we can see darts back and forth, panicked.

Her head is wrenched back so that her throat is bared.  It holds there and she screams, until a think black line is seen tracing across her neck and up the side of her face where it spreads into half a dozen lines.  The corpse coloured hand pulls away and she pulls away from the window where she stands, emotionless and unmoving.

The man screams, off camera, and then goes silent.

The camera pulls back to reveal the side of a starship.

As it pulls further back, we can see an Akira class starship heavily damaged.  Explosions wrack its hull and life pods scatter the scene, damaged and floating, lifeless.

EXT. SPACE
The camera keeps pulling back to reveal the shattered and burning hulks of multiple Federation starships.

As the camera continues its journey, an enormous Borg Cube, larger than any ever encountered, is seen in orbit of Earth.  The Starfleet vessels look tiny around it.

OPTICAL EFFECT:
A GRAPHIC FADES IN, IT IS BLUE/WHITE AND BEVELED ON A BLACK BACKGROUND.

THE GRAPHIC FADES OUT.
A VOICEOVER SPEAKS ACROSS A SHOT OF THE USS ENTERPRISE-E FLYING IN TO ATTACK THE BORG SUPER CUBE.

VOICEOVER, T’POL
The Borg returned to threaten Earth and
the Federation in a ‘supercube’
comprised of multiple Borg vessels that
had been cut off from the Collective.
Eventually, that cube was destroyed, but
the Borg were not stopped.

OPTICAL EFFECT:
ANOTHER GRAPHIC IN BLUE/WHITE AND BEVELED ON A BLACK BACKGROUND FADES IN.

A VOICEOVER IS OVER THE GRAPHIC.

VOICEOVER, BORG
You will be annihilated.  Your biological
and technological distinctiveness have
become irrelevant.
(BEAT)
Resistance is futile.

The scenes stop shifting and hold on a shot of Earth looking beautiful and peaceful.  Then hundreds of Borg cubes warp into orbit and surround the planet.

VOICEOVER, T’POL
I was there at the birth of the
Federation.
(BEAT)
During the final Borg attack, I
wondered if I would also bear
witness to its death.
(BEAT)
Thanks to the Caeliar, Earth
survived.  Dozens of other
worlds did not.

A SERIES OF MUCH SLOWER INTERCUT SCENES FILL THE SCREEN, SHOWING REFUGEES BEING ASSISTED BY STARFLEET PERSONNEL ON VARIOUS FEDERATION, KLINGON, AND CARDASSIAN WORLDS.

VOICEOVER, T’POL CONTINUED
63 Billion people lost their lives
during the Borg Crisis, and billions
more were left homeless.  As we
recover, I now find myself
wondering if we can survive the
next threat, and whether or not my administration
will be the Federation’s last.

OPTICAL EFFECT:
THIS SERIES OF GRAPHICS AND INTERCHANGING SHOTS GOES BY QUICKLY.  ALL GRAPHICS ARE BLUE/WHITE AND BEVELED ON A BLACK BACKGROUND.

THE USS VOYAGER SAILS ACROSS THE SCREEN, LEADING A SMALL FLEET OF STARSHIPS THAT GO TO SLIPSTREAM.

THE IMAGE FADES AS THE GRAPHIC CHANGES, WITH EACH DATE FLASHING BY QUICKER THAN THE LAST:

THE GRAPHIC HOLDS FOR LONGER THAN THE OTHERS, THEN FADES TO BLACK AND THE SCREEN STAYS BLACK FOR A FEW MOMENTS BEFORE:

VOICEOVER, T’POL CONTINUED
With the destruction of the Romulan
star system, and the resultant
proliferation of Romulan weapons
and vessels on the black market, our
next threat may very well come from
within.

THE GRAPHIC STAYS ON A BLACK BACKGROUND AS THE OPENING CREDITS SEQUENCE BEGINS.

The camera is hovering in front of Starfleet Command Headquarters in San Francisco.  It arcs to an overhead view of the facility and then slowly starts to pull back, sailing through the atmosphere into space.

The camera holds the Earth and moon in shot for a beat, then turns around on the spot, almost inducing a sense of vertigo, passing by the huge Starbase in orbit to stop on the spiderweb like structure of the spacedock facility.

The camera cruises into a close up of the USS Challenger in the dock.

The image holds on the Challenger for a beat, and then the ship sails out, past the Starbase and Earth, and leaps to warp.

The title card fades in:

The title card fades to be replaced by an image of Captain Saavik rising out of her Captain’s chair.

The image shifts to a heavily muscled, bald Deltan male firing a phaser while advancing down the corridor of a Federation starship.

The image changes again to a beautiful, red haired woman standing over a Romulan on a bed in Sickbay, examining the wounded man with a new style tricorder.

The images changes to an attractive blonde woman sitting at her station on the bridge, a serious look on her face as she stares forward.

The image changes again to a beautiful woman of Indian descent looking intently into the screen as she stabs a button on a console as sparks fly behind her.

The image shifts once more to a handsome, slightly arrogant looking dark haired young man staring up at a warp intermix chamber.

The image shifts one final time to show a handsome, well built African man receiving a medal on a podium at Starfleet Command Headquarters.

BASED ON STAR TREK, CREATED BY GENE RODDENBERRY 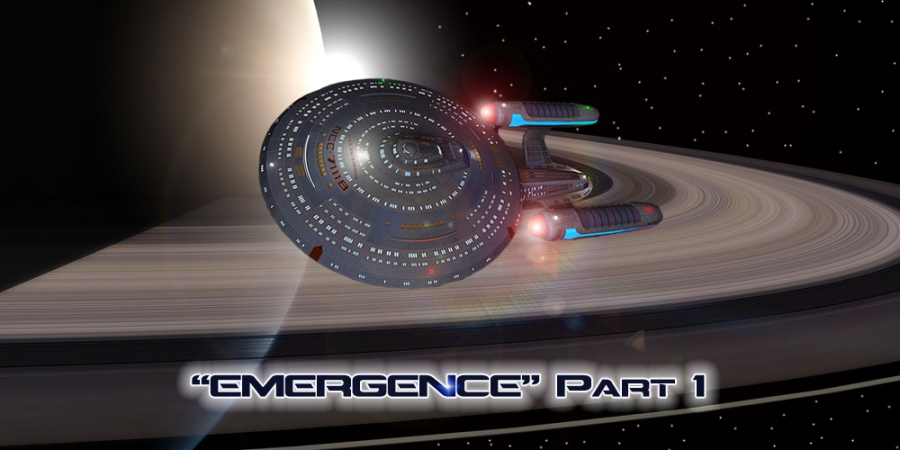